Sunset  was at 8:11 pm so I went out to the pen a little after 8. The three chickens were milling around, scratching and peeping and seeming quite anxious. "This is a strange place." "Where will we sleep tonight?" "Everything is so different here."

Eliza tried to get underneath the feeder. She scooted down but could only fit her head under. Nope, that's not gonna work. As it got darker and later, Peggy flapped her way up to the door into the coop and squatted in the doorway. "OMG," thought Angelica, "that looks like a roost in there." But Peggy was in the way so Angelica just bounced off her when she tried to fly in. Meanwhile, Eliza was trying to get under the feeder from the other side.

Peggy came down and scratched around some, then flew back up to the coop. Ever alert, Angelica was only a second behind her. But she was also about 2' to the right, so bounced off the wall next to the door. At least Peggy moved further inside, so Angelica's next attempt to fly (using the term "fly" loosely; more like flap, or maybe flail) was successful and she moved to the back of the coop too.

Eliza removed her head from under the feeder, looked around to find herself all alone in the pen. She scratched a bit, just to show that she wasn't "really" scared or panicky. Then Eliza heard the others inside the coop and, somewhat more gracefully than Angelica had, flew inside.

I hurried around to the side of the pen to close and lock the door! Safe at last.

[Sequel -- the second night, I went out at about sunset to find that all three had put themselves to bed with no fuss at all. Close and lock the door. Done.] 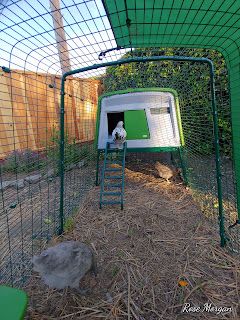 Sunset  was at 8:11 pm so I went out to the pen a little after 8. The three chickens were milling around, scratching and peeping and seemin...